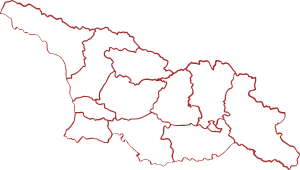 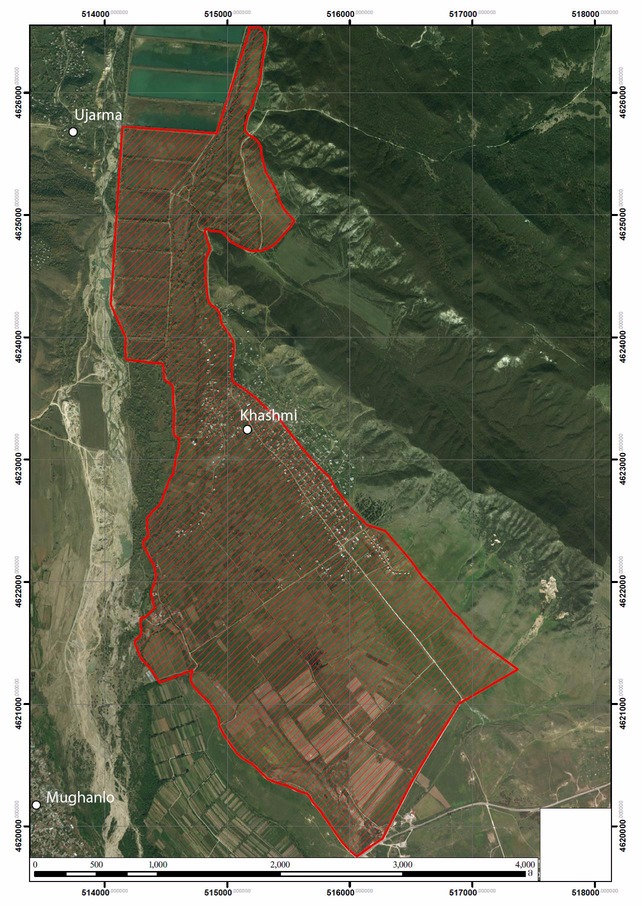 Brand name: "Khashmi Saperavi" "Khashmi Saperavi" - is  red, dry wine. "Khashmi Saperavi" should meet the following requirements: Color - dark red, age-appropriate nuances; Aroma and taste - flawless, microbiologically healthy, body-minded, velvety and harmonious, with distinctly expressed varietal aroma; Factual volume of alcohol should not be less than 12% Concentration of the reduced extract should not be less than 24 g / l; Sweetness should be no more than 4 g / l; Tartaric  acidity should not be less than 5 g / l; Other features shall be in compliance with the requirements of the Georgian legislation. The Khashmi micro-zone is located in the sub-zone of Kakheti,   Sagarejo administrative district, on the southwestern slope of the Tsiv-Gombori Range on the left bank of the river Iori, on the territory between the coordinates 41 ° 43 'north  latitude and 45 ° 10' east longitude. The Khashmi micro zone includes the village Khashmi. The area of Khashmi micro-zone is 887 hectares. "Khashmi Saperavi" should be produced only from the Saperavi grapes  variety harvested in the Khashmi micro-zone. The grapes intended for the production of "Khashmi Saperavi" should be harvested only from vineyards planted in Khashmi micro-zone. Grape processing and wine making should be carried out only in the borders of the Khashmi micro-zone, and the bottling is allowed outside the micro-zone on the territory of Georgia.  "Khashmi Saperavi" is made through a complete alcoholic fermentation of dregs. In the production of "Khashmi Saperavi" it is allowed to use only the operations, materials and substances that are permitted by the Georgian legislation. Bottling "Khashmi Saperavi" in consumer package is allowed since August 1 of the next year of vintage. The human factor - cultivation of vineyards in Khashmi area is associated with the name of Queen Tamar.  Vineyards were cultivated here with her order by David Garejeli fathers . The local population has learnt  the rules of vineyard care and  wine-making very quickly and made quite high quality wine from Saperavi  grape variety. In the village of Khashmi, together with  Kvarelashvili, Goqadze, Qarumidze and others, Qoqrashvili family have also contributed to the development of viticulture and winemaking, who were very experienced viticulturists   and winemakers. According to the  ethnographical researches of G. Sumbadze's (1962), one of the oldest cellars in the village of Khashmi belongs to Qoqrashvili. The ancestors' traditions were continued with dignify  by brothers - Zaur and Elishuk Qoqrashvili, who presented their family cellar Khashmi Saperavi, named by their  ancestors as "Devis Siskhla",  at the "The First Festival of Georgian Vine" in 2004, where they became winners and in 2005  "Devis Siskhla", Khashmi Saperavi – won the Silver Medal in international competition in Yalta.   The wine quality was extremely highlighted here and it was successfully sold not only in  Georgia, but also  in the Russian Empire and Europe. Currently small cellars are successfully developed  in Khashmi. "Jakelebi", "Artisan", Ketevan Duduashvili, Davit Berulava are the representatives of the family cellars of Khashmi, who regularly develop the quality of Khashmi Saperavi, participate in the annual "New Wine Festival" organized by Wine Club and the National Wine Agency and various exhibitions and competitions and are successful in this business. "Khashmi Saperavi" is a very popular wine and has high reputation in Tbilisi and the whole Georgia. Geographical location of Khashmi micro-zone, climate of the region. In foreign languages the name "Khashmi Saperavi" and the marking "Preserved Appellation Wines" on the  label, packaging, in addition in  wine accompanying documents and advertising materials will be as follows: Latin font - Saperavi Khashmi Protected Designation of Origin ან/და PDO Russian font - Саперави Хашми Защищённое наименование места происхождения State control of the production specification and proper use of denomination will be carried out by LEPL - National Wine Agency according to the rule established by the Georgian legislation.